Skip to content
Home Games Coffee Noir, or what would happen if Sherlock Holmes decided to sell coffee

Coffee Noir, or what would happen if Sherlock Holmes decided to sell coffee?

With g ry warning, the production discussed below is one of a kind. Tw The experts refer to it as a „a detective business game”, which, at first glance, may not seem like much visit. However, it only takes 5 minutes to sink into a leather sinking into a rocking chair, smelling the aroma of freshly brewed coffee beans and starting a business. Of course, the investigation e are also in a similar situation, but at the same time!

What do Coffee and a detective have in common?

Before we move on to the actual discussion If you are interested in the title, it is worth saying a few words e have to be able to give it a lot of thought in a few situations rcom. Coffee Noir is the responsibility of the Polish team DOJI – Educational Innovations, which The game tries to combine learning with fun. The idea of creating educational games is nothing new, but an unusual project by a studio from Poznań makes the approach to electronic entertainment really change. On the one hand, they provide a powerful scientific background (production was created with the help of employee in the scientific University of Economics in Poznań), and on the other hand an original formula. As if that wasn’t enough, this is a browser game! Interested?

I have to admit that I don’t deal with business issues every day and more complex terminology is alien to me. In a similar situation is the main The main character, Arthur Oliver, is a detective who ry must solve a criminal mystery. Richard Kersey, a well-known London entrepreneur dealing with coffee distribution, has gone missing. C The victim’s daughter orders us to find her father and suggests that businessmen may be involved in his mysterious disappearance e are in a similar situation ry have to solve a criminal mystery in the rc. Reaching them and extracting the relevant information will not be easy, which is why we were suggested to start our own coffee business. Under this guise the investigation should be much easier. Why should? It turns out that managing a company is not that easy!

After kr Coffee Noir proves right away that it is a tycoon game with flesh and blood. We have a coffee business at our disposal, which e manage from scratch. We hire an employee in, we assign them specific tasks and even train them. We decide how much coffee to produce, we upgrade the machines to make the process cheaper and faster. We deal with Also contact with the media to advertise our goods. On top of that, we set up contracts with contractors to sell our coffee. So as you can see, it’s not easy! In almost every aspect mentioned above, we have a mn an abundance of data and information to assimilate, which The game is a tycoon in the flesh and in the bones of Coffee Noir orld. 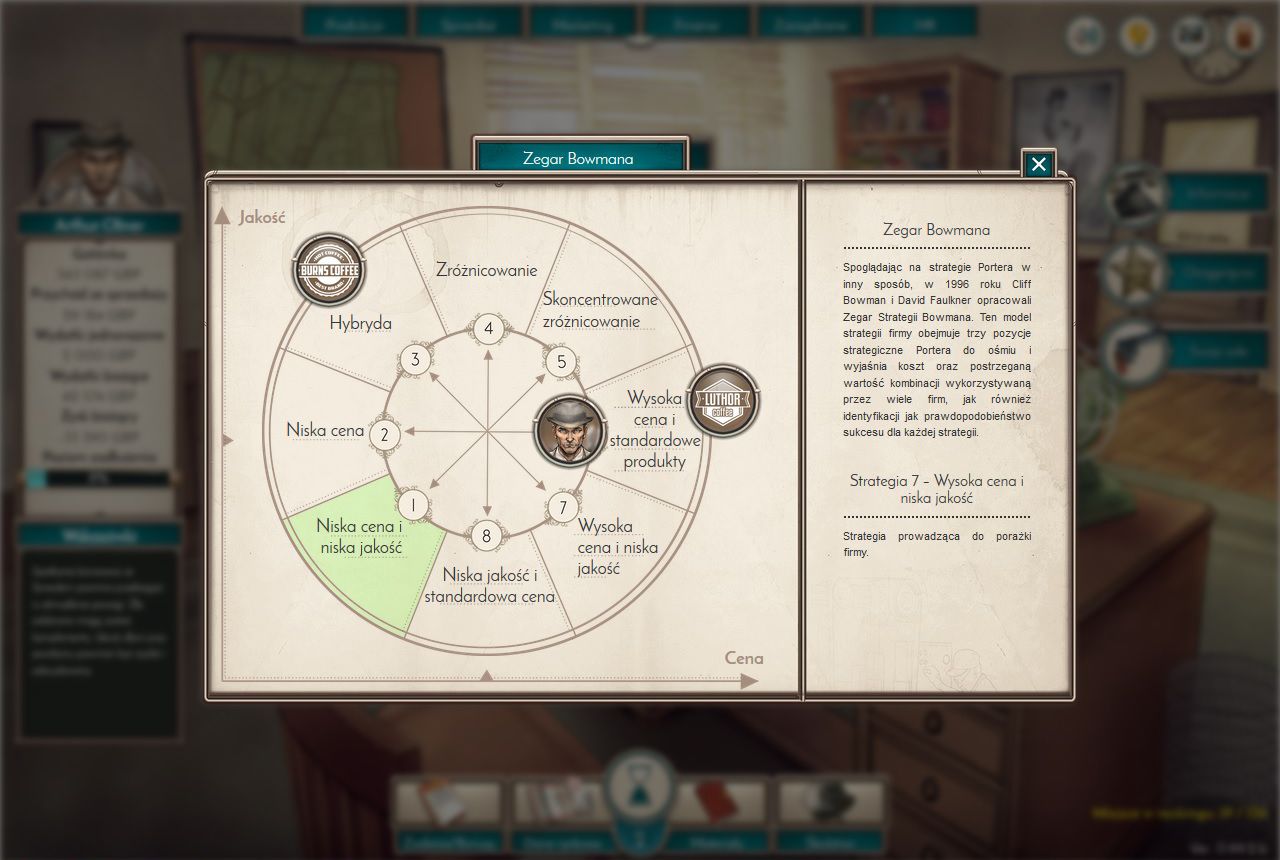 Fortunately, each option is clearly described and the game provides advice on our actions and potential effects. The tutorial will guide us through the initial stages of the game, explaining all the nuances. However, after a while we will be thrown into the deep end and we will have to run the business ourselves. Fortunately, tw The authors have made available an interactive manual, which ry is in fact an extensive collection of academic knowledge. Sometimes we will use it, because in order to raise the qualifications of our employee, we have to pass a test, which resembles a colloquium! While playing Coffee Noir I felt like I was in a crime he was at the university.

In the coffee bean lies the solution

One of the most important elements in fun are our contractors. On the one hand, they are important business partners, after all, it is to them that we sell coffee. On the other hand, they serve as a driving force for the criminal aspect of the game. While negotiating the contract and force you to take a loan from them’and we determine whether our client was not involved in his disappearance. Dialogue options are usually several and some are used to get data, others will be useful when talking about the contract. We remember that our protagonist is not only a detective, after all, all the time he has to develop his j coffee business to m to get to the next suspects. Interestingly, we can order our employees to get information about the contractor The interest will not be repaid by itself, and the employees will have more resources before the interview b knowledge about them. Sometimes a trivial thing like the birth of a child can turn out to be crucial. 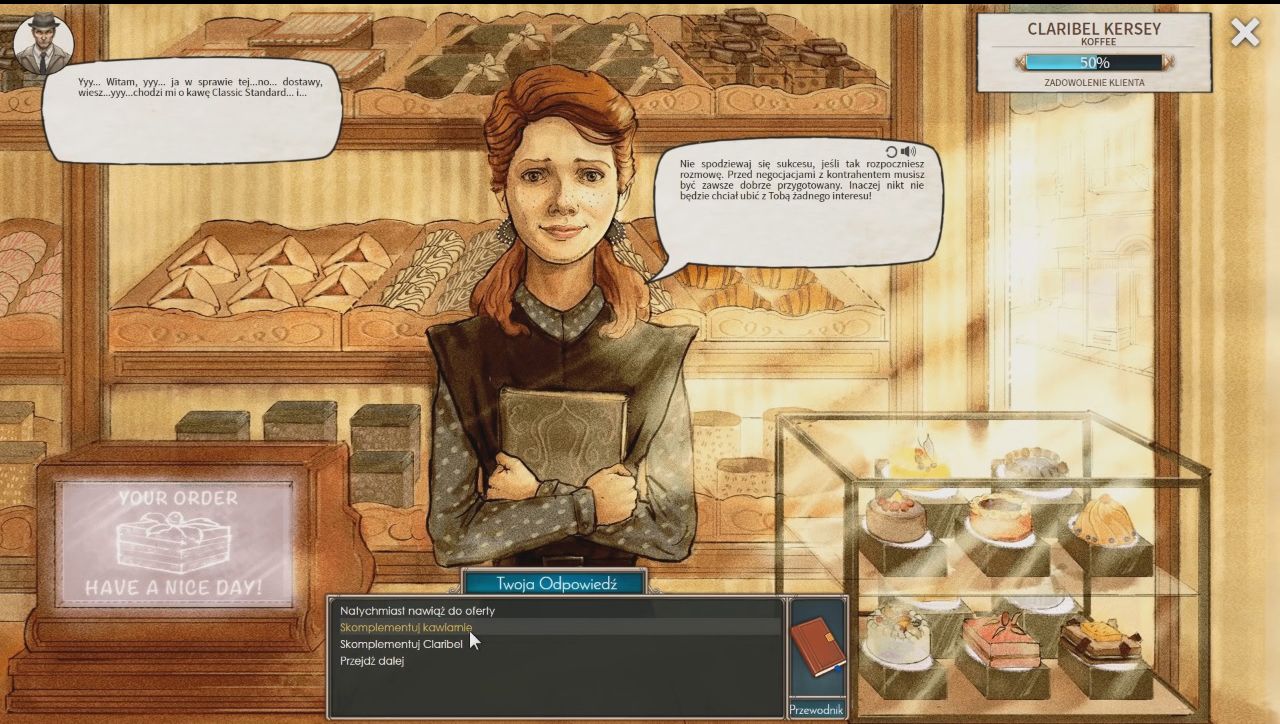 The Each stage of the game has been divided into rounds. When at a given moment we have taken all possible actions, we end the turn, which The first is the equivalent of one week. After 7 days we observe how our goods are selling, check the level of our reputation and collect the fruits of our employees’ labour. After 48 weeks we can point out one of 10 suspects and finish the investigation. Assuming, of course, that we have chosen well and solved the mystery of Richard Kersey’s disappearance.

In theory it all sounds simple and pleasant, but you will see for yourself that running a business is a real challenge. A few imprudent actions, lack of market analysis or unsuccessful negotiations will lead to depletion of our finances in and force you to take a loan. The interest, however, will not be paid off on its own, and the employees They also have to get paid, otherwise they will leave the company. Fortunately, Coffee Noir is happy to point out our mistakes and give us examples of correct solutions. Do not delude yourself, however, that after one session you will become a business shark!

Applause is due to tw The game has been designed by the artists responsible for the graphic and sound design of the game. The whole thing is stylized on an American comic book in noir style, which There is a definite lack in electronic entertainment. In addition, there are atmospheric jazz tunes, thanks to which e can almost smell the cigarettes in and out of coffee. Undoubtedly, the climate is one of the greatest assets In the production of DOJI studio. Despite the overload of information in the title and the vast amount of knowledge it contains, thanks to the appropriate setting, the whole thing assimilates without too many problems. I admit that if for my time in the academic, someone tempted by such a form of education, I certainly would not miss any lecture. 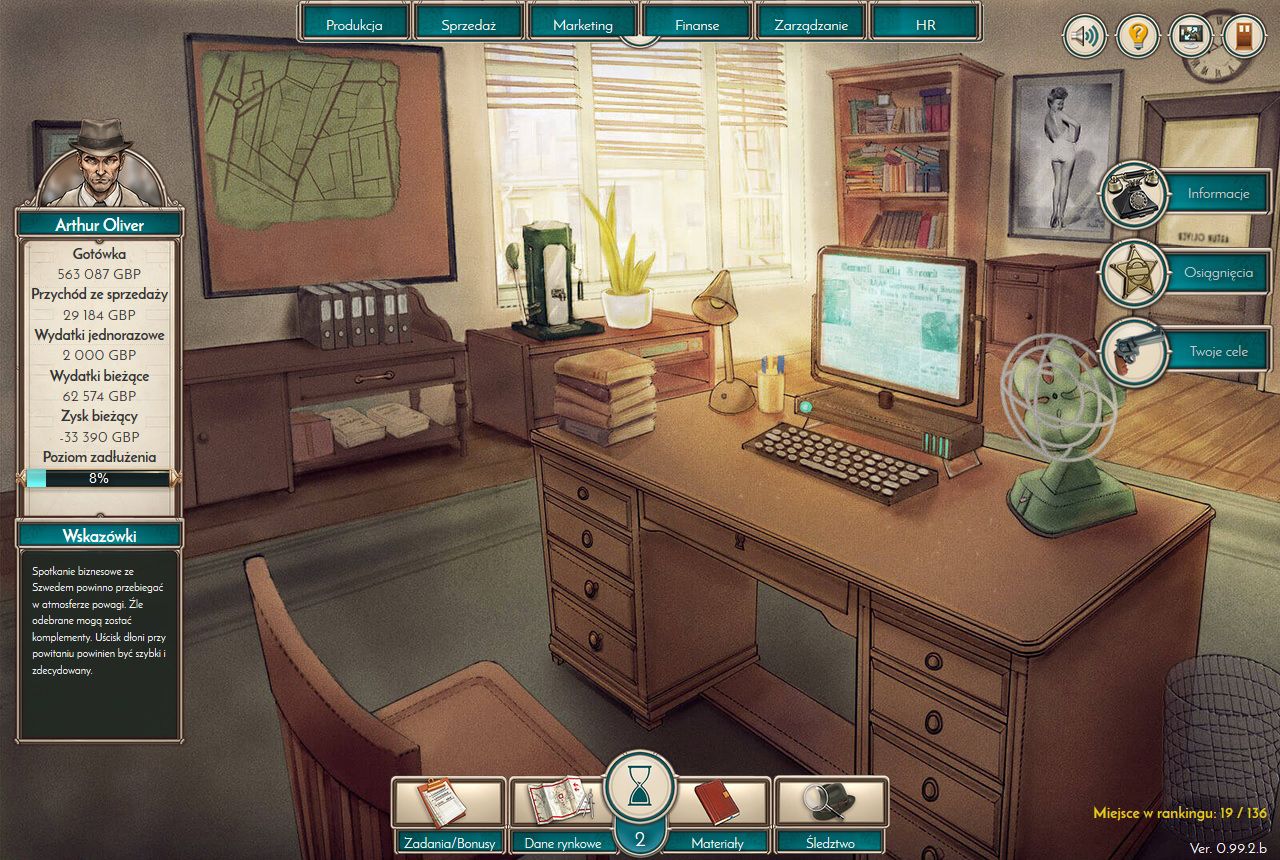 Coffee Noir will not reach all amateurs of computer games. It is a production aimed at people b interested in running a business and marketing. You have to reckon with the fact that the detective elements are only a pretext to create an educational project – That is why the storyline takes a back seat here. Nevertheless, thanks to its atypical approach to the topic of e-learning, it could return to attract layman’s attention in, such as e.g. me! This is all thanks to the addition to the production of strategic and business aspect The criminal and atmospheric visuals. I didn’t expect to say this, but coffee has never been so intriguing!