Ikariam – Greece with a touch of steampunk

Ikariam – Greece with a touch of steampunk

The following review is not my first encounter with Ikariam. I played the game a good few years ago, when I was still in middle school. This is one of the fairly classic games of its genre, and it hasn’t changed much. But my tastes might have changed. I didn’t enjoy the game as much as I used to. In all likelihood, I haven’t had a spark in me again since I shied away from visiting ancient Greece. Nevertheless, I am able to present it to you. Who knows, maybe you will like it. Ikariam is a solid and thematically unique game. Even though it represents a format established years ago, when there were very few games of this type.

Ikariam is set in ancient Greece with the odd addition of steampunk. Although, I won’t cut my hand off for the functioning of the game’s embedded steam machines. I haven’t read any explanations about that. Nevertheless, this idea alone creates a unique game world, which ry sw j the atmosphere is established by the graphical elements themselves. 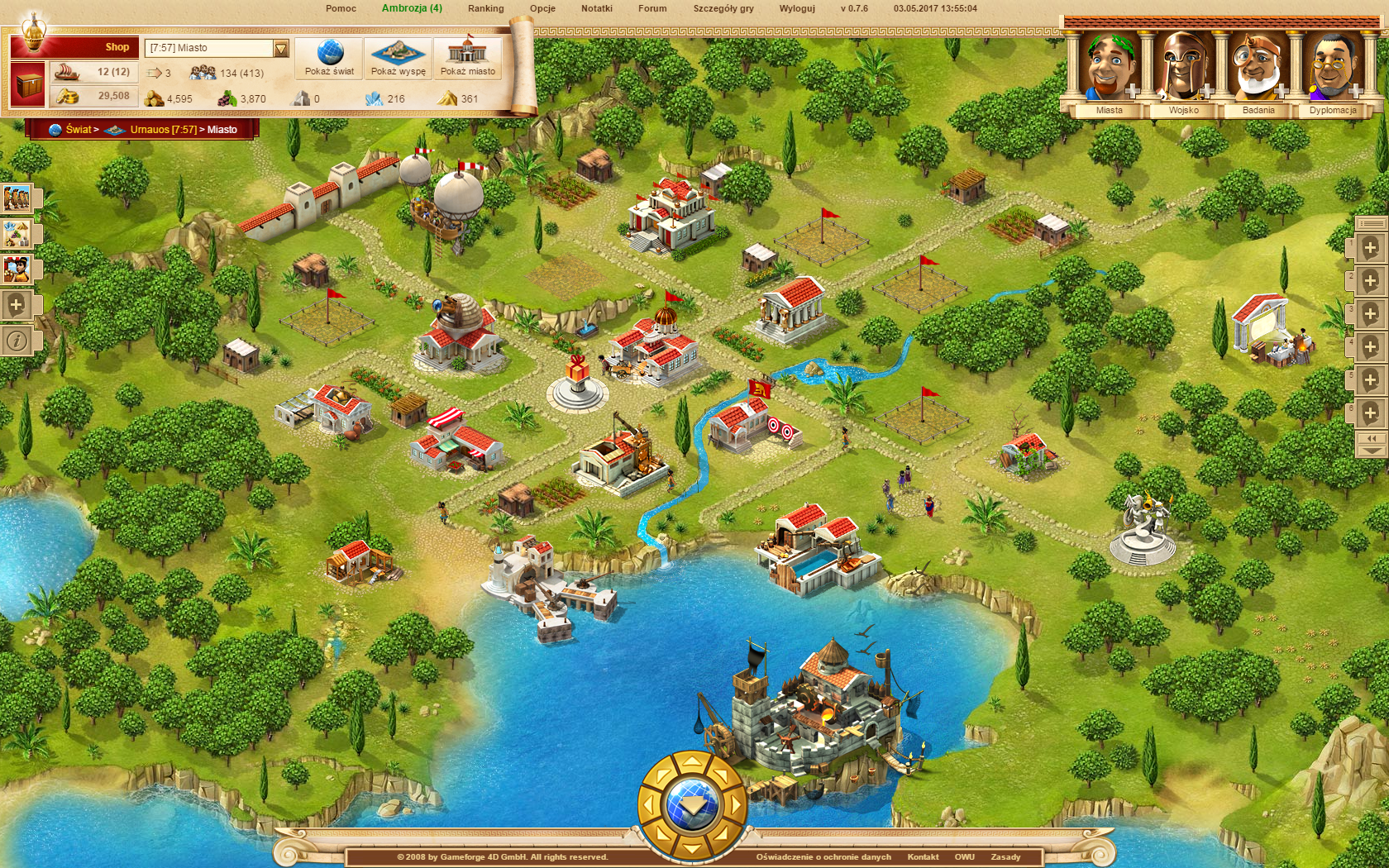 The gameplay, on the other hand, is an old-fashioned browser strategy model. We get our own city under our control. In this case set on an island. We create buildings chosen from a list which is expanded by research. Next, we recruit an army from the designated ek, kt ra fights fully automatically. We only receive reports. At one time these solutions were the order of the day, and frankly m in continuing to make a solid living. Maybe the fight is limited to create a better composition in larger quantities, but at least it doesn’t take us all day. At least for me it is an advantage in browser games. Ultimately, this genre evolved from the desire of busy people to play something after all.

We can place a limited number of buildings in our town. In addition you will not find all the raw materials on one island. Because of this, there is a constant need for expansion in Ikariam. The tutorial itself ends not long after teaching us how to found new cities. 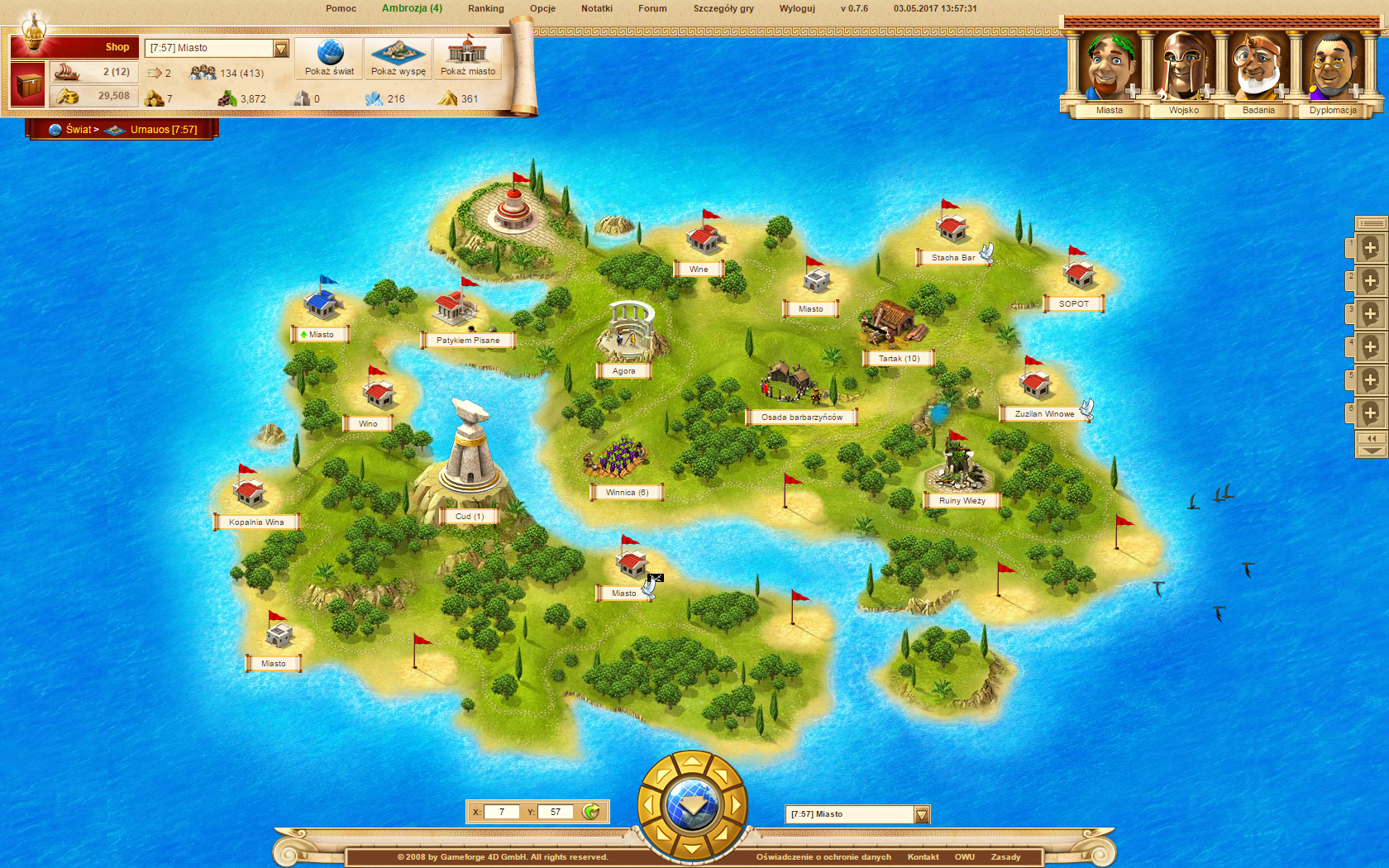 Raw materials in, about which There are six of them in Ikariam. The basic one is gold, which re generate non-working citizens. It is an ogre A valuable resource for trade, recruiting troops and maintaining the city. The others generate mining facilities. Wood can be produced on each island and is the basis for the construction of buildings. Others are more luxurious and specialized goods. There is only one random square on the island ka different from sawmill. From it, we gain one of these four resources. Marble is used for advanced development. Crystals are used to develop buildings related to science, and sulfur is used to recruit troops. Besides, there’s wine, which re allows us to increase the satisfaction of the inhabitants. This in turn changes depending on the conditions in the city life. These are worse when the city can’t cope with the defense or when our colony doesn’t have a sufficiently developed outpost The governor’s cask under their population. In addition, a large impact on the lives of our residents has our ustr j political. There are several of these and they must first be invented. They give us a variety of modifiers combined with disadvantages. There are six of them, so I’ll give up the list with an in-depth explanation. Ultimately, however, the style of game we decide on has overt strengths and weaknesses. On the other hand, the development The development of cities requires the creation of more and more colonies, even more distant from each other.

Fraternity with the need

Ikariam still has a certain advantage, which ry I remember from its early days. It helps us to get to know and ally with other players out of pure need. Possibility to supply mines with workers is limited by its level. This increases when the mine receives the required amount of donations. All of these neighbors are making up lnie. 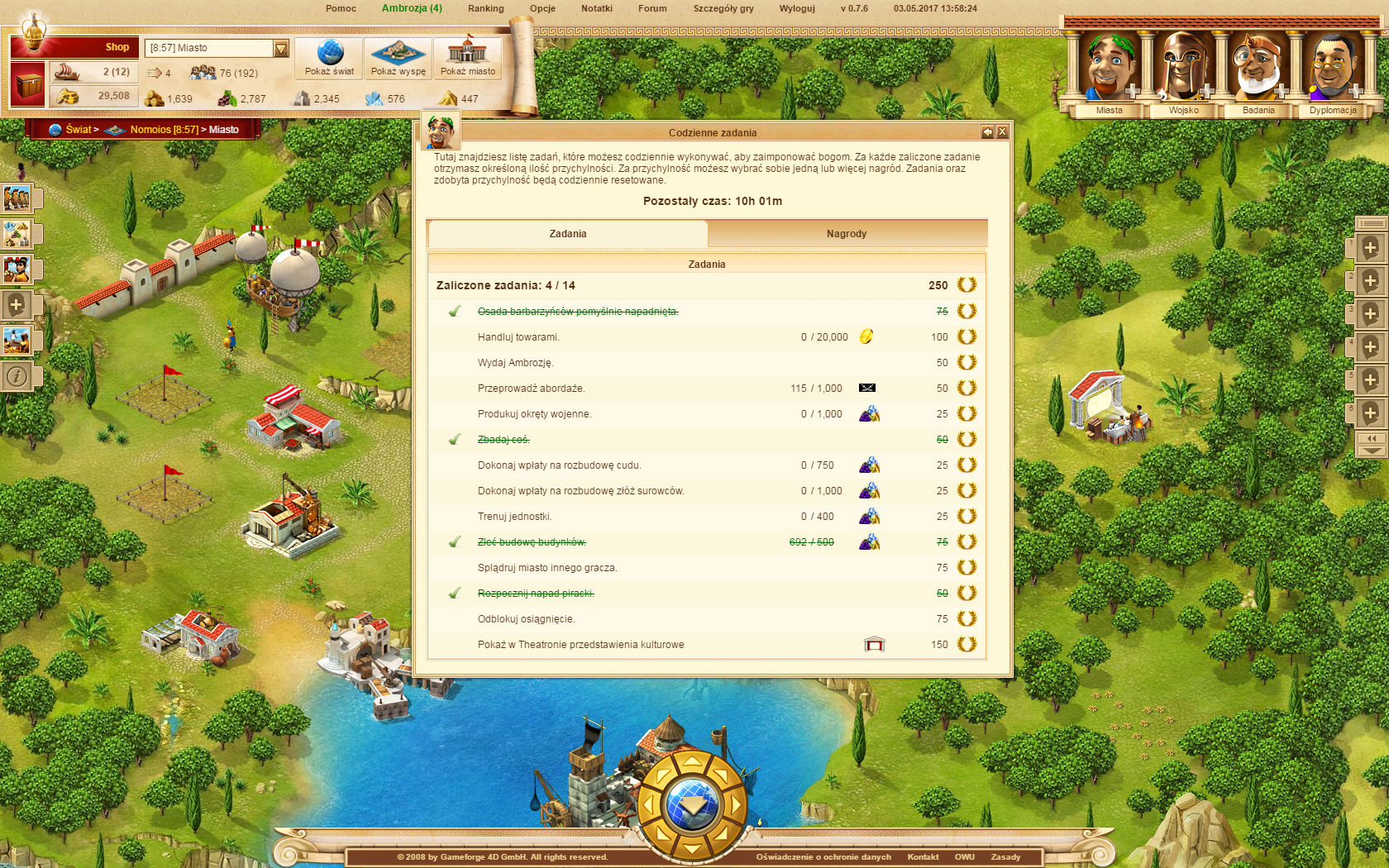 Opr and there is also the possibility to create a special tower. One of the players has to pay for its creation. As a reward for his sacrifice, he can choose its appearance and it is named after him. Then everyone on the island can make fuel donations. As long as we are able to keep the flame burning, we get bonuses.

Because of these two rather important mechanics, we don’t want to be at odds with our neighbors. At least as long as they help the development of the island. It also gives players a pow d to form alliances and clans with strangers who ho showed up on their island when setting up an account. This is an organic mechanic that I would love to see it in more games, especially strictly PvP like Ikariam.

I mentioned in the introduction that Ikariam does not seduce me length. Now I would like to explain why. The only goal in the game is expansion. We can do it on deserted islands. Then we develop more and more cities safely. These are hardly unique. They are very static. Our city has certain fields per square ki in specific locations. We can choose what lands on a given field, but eventually each city will be twinned with any other. Newer browser-based titles offer us more interesting solutions in this regard. 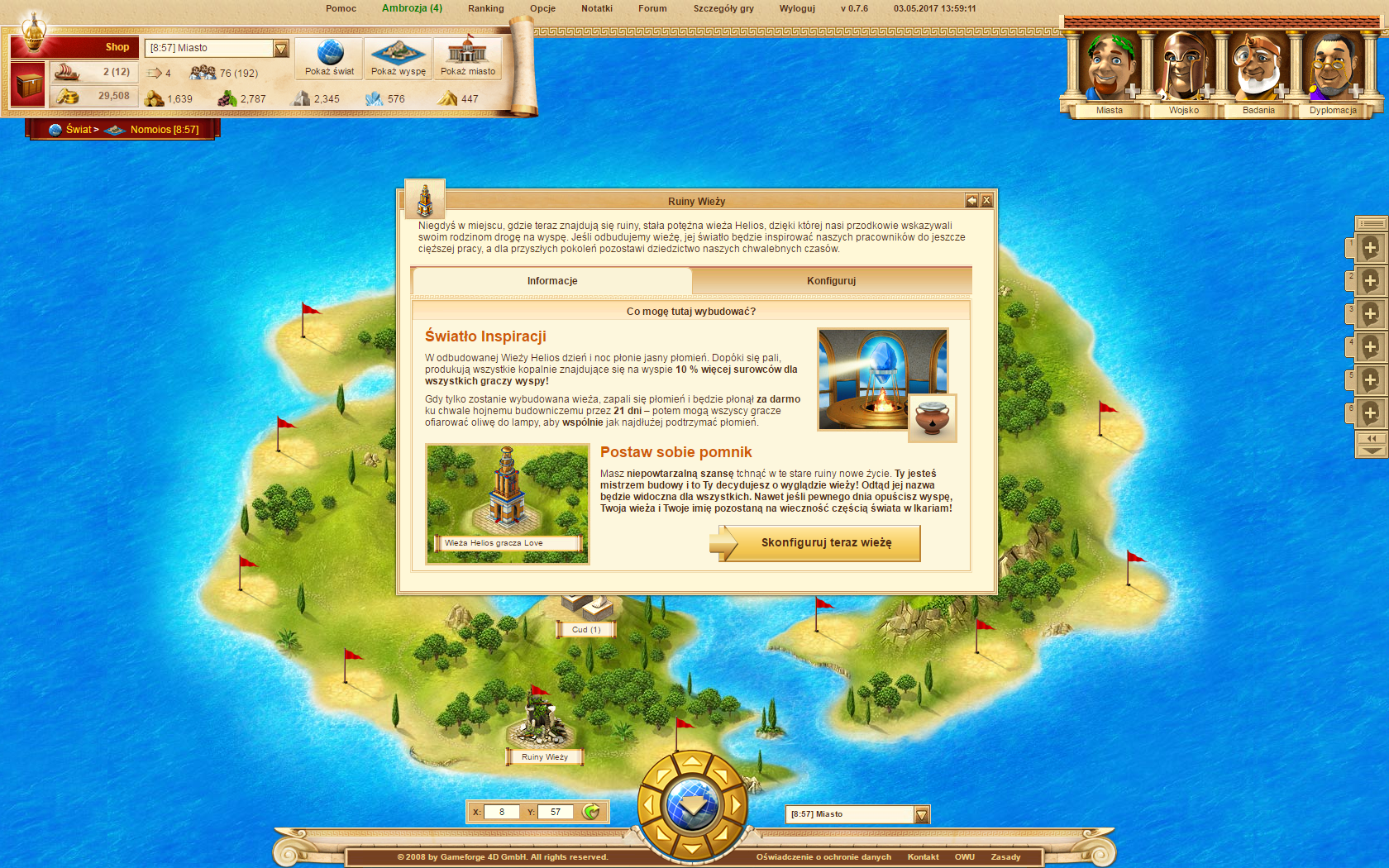 The game has almost no PvE functionality. Each island has one ob of bandits in, which ry grows in power every time we raid it. It is only a source of resource e also have a list of tasks to complete, because the bandits themselves do nothing. In addition, we can build a pirate port and commission it for gold. In return we get points for the ranking, which Some of them reset once a month. These activities are not very extensive and not very profitable. If we are more inspired, there remain PvP struggles.

However, the fight with the players themselves is not very interesting. Problem in the i plaintiff I’m not sure if there are really any combat options, we just have to find them ourselves. The most popular is the desire to quickly collect resources in the usual looting. So we send the spy It is pleasant to look at and has a very nice style, which allows you to acquire information about the minimum troops necessary to win. Then we make decisions and throw our armies at the other player. If you are lucky you will not wr those of us with friends or we will have more of them.

In the past, when I started my adventure with browser games, these were the struggles offered by most of them. There were about five such games on the market back then. It suited me and I had a lot of fun. My friends and I used to form groups and fight for points in the ranking. Currently it seems a bit too small, but it is definitely a solid and stable design. However, we could use more reasons in and of itself in order to act.

Pour ambrosia, do not look at the cost

As for the payment system in Ikariam, at the moment it is not very clear. When you visit the store, you will find a wide range of temporary premium services. Boost you can get for practically anything. I’m not sure who It’s hard for me to say how fair it is. In theory, paying for each bonus separately is helpful because we’re only interested in what we need. Especially in the In the later game, when we have many colonies, some of them re boosts may be unnecessary for us, so if there was only a total package, it would lose its value. On the other hand, through this multitude of offers, the store looks quite discouraging and a bit expensive. 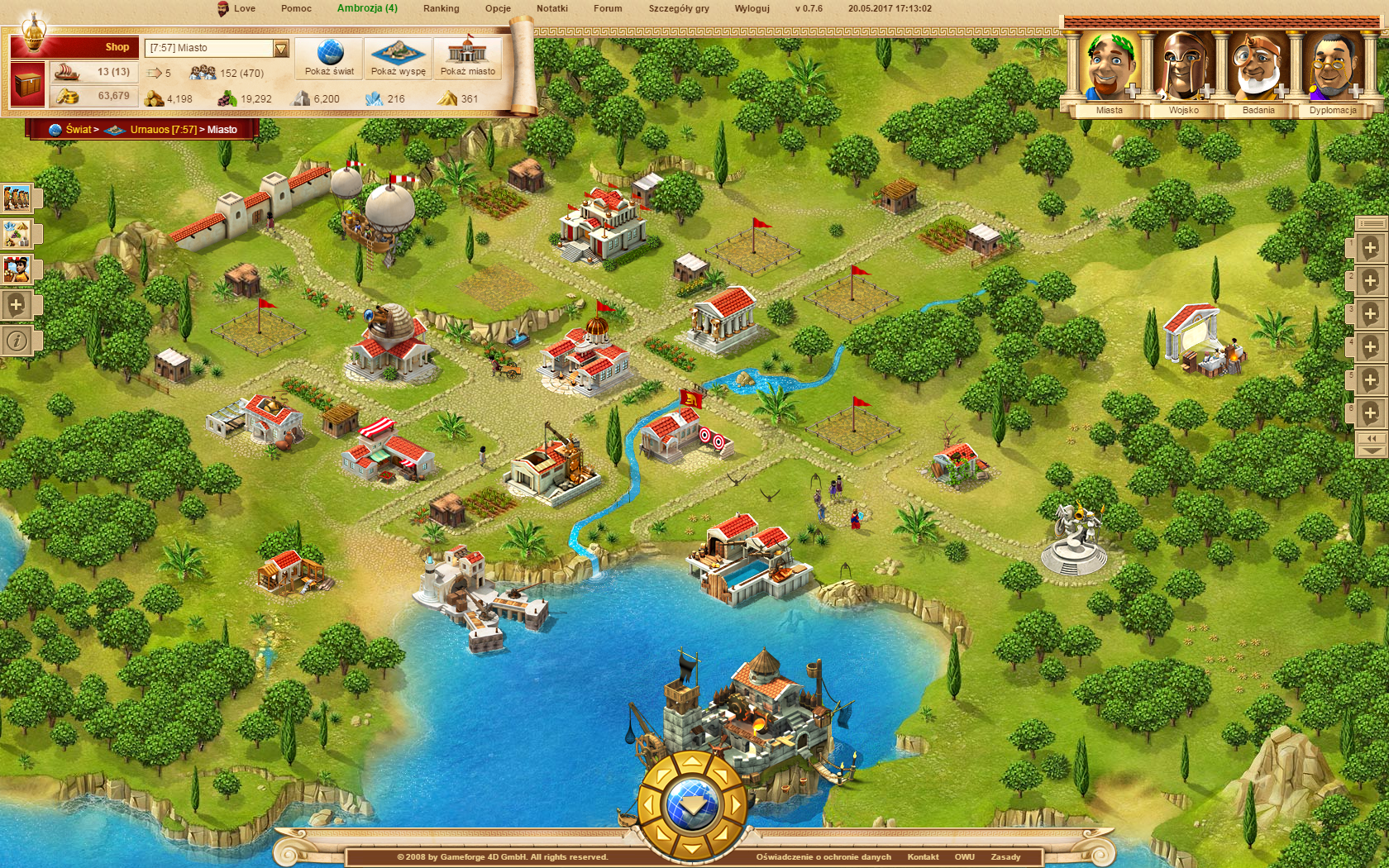 Ikariam offers free methods of acquiring some rych bonus. Once a day we can watch sponsored videos (personally, I’ve only seen trailers of other publisher’s games) in exchange for boosts for the day. We also have a list of tasks to complete, which The game resets every day. Tasks give us points, for kt re we can buy a bonus in a special store, including basic premium package or chosen boost for one day. The tasks are not difficult, and by completing all of them every day you can afford about 3 and p I have support every two days.

The only thing about which I haven’t mentioned yet, is a graphic. This one is pleasing to the eye and has a very nice style, which Some of them reset once a month time. Even if it is not particularly varied. The world map looks unremarkable. Everything else, however, is fine. If you are looking for a classic browser game, Ikariam may satisfy you.