Skip to content
Home Games Jorden – In Your Own Words

Jorden – In your own words

Realistic warrior world in, norse runes and iron battles. Endless possibilities in a game with a light dose of defined, yet mathematically free mechanical support. You face the cold and brutal Jorden — PBF RPG game addressed to all those interested in the struggles of the early Middle Ages.

In our own words

A few weeks of subr It’s hard to call it a dream to sail a wooden boat across a rough sea, equipped only with barrels of grog and cabbage. However, when the alternative is wandering through the cold tundra forests in the middle of e have three categories, three stats in each rz, being exposed to the attacks of tribes and wild animals, even a crackling roundup looks cozy. 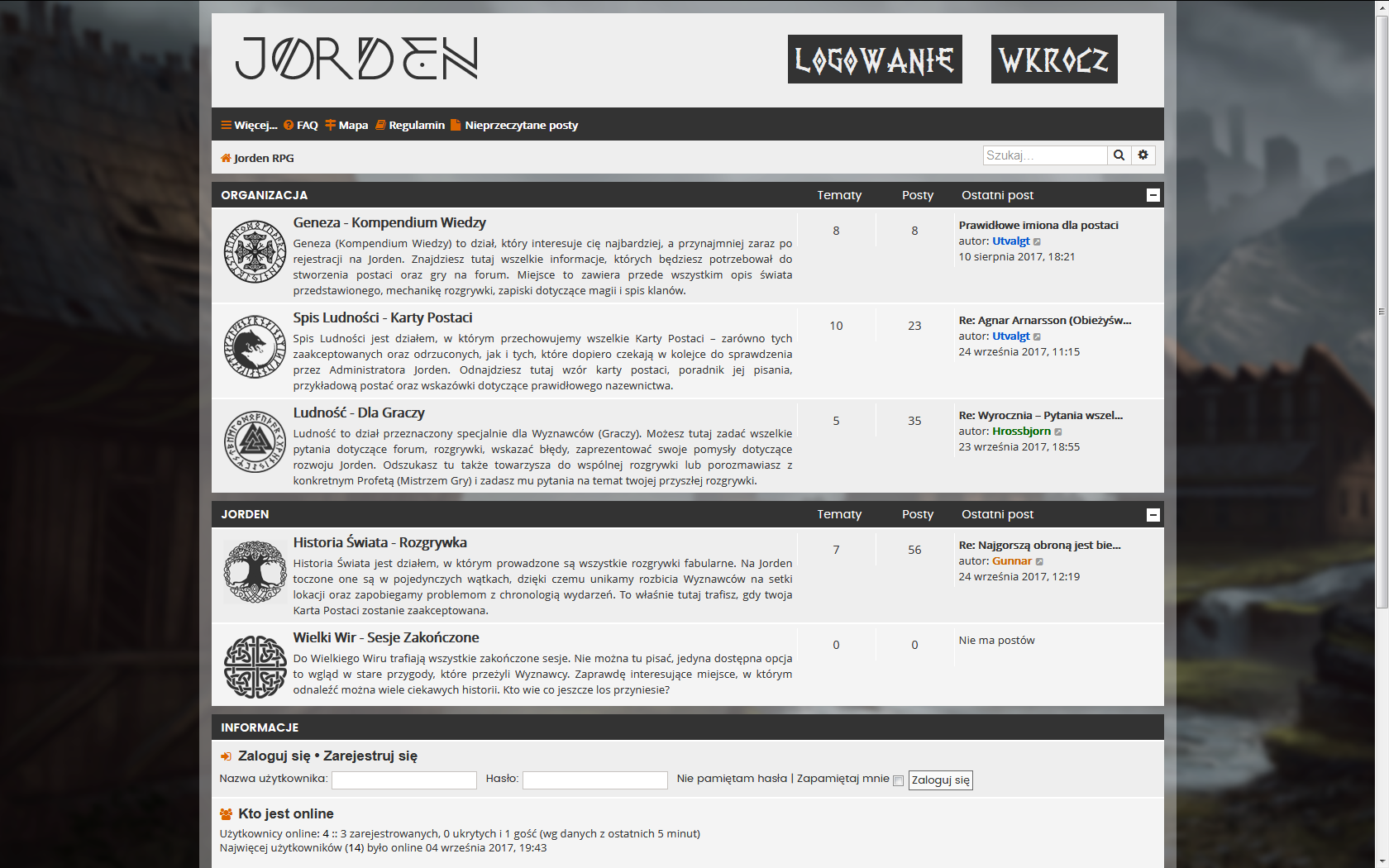 In a very skr In this introduction, this type of reality is presented to us by Jorden. This is an RPG forum set in a world of Norse mythology, minor societies of the early Middle Ages, Jarl rulership and discovering the value of iron. If anyone has played skyrim, the nords there drew on the same cultural inspirations.

By forum RPG I mean the adaptation of paper-based gameplay into a play by forum format. In other words, players create a character and describe their actions and decisions in their forum posts. The game master taking the role of the narrator describes the effect of these struggles and the reactions of all the secondary and tertiary characters to the decisions made by the player. In this way b we have limitless gameplay. The roles of the processor, interface, and graphics card of such a machine are our imagination.

The beginning of this game is to create a character fitting into the reality, defining his/her skills and character. In order to do so, we need to The gameplay system is also easy to understand. In role-playing games, it is not e have two standards: storytelling and system solutions. In the former there is no technical basis for predicting the outcome of , the whole thing is a result of the stories. The latter uses statistics and dice to make the results dependent on natural luck and strategy, eliminating the bias of the game master running the story. 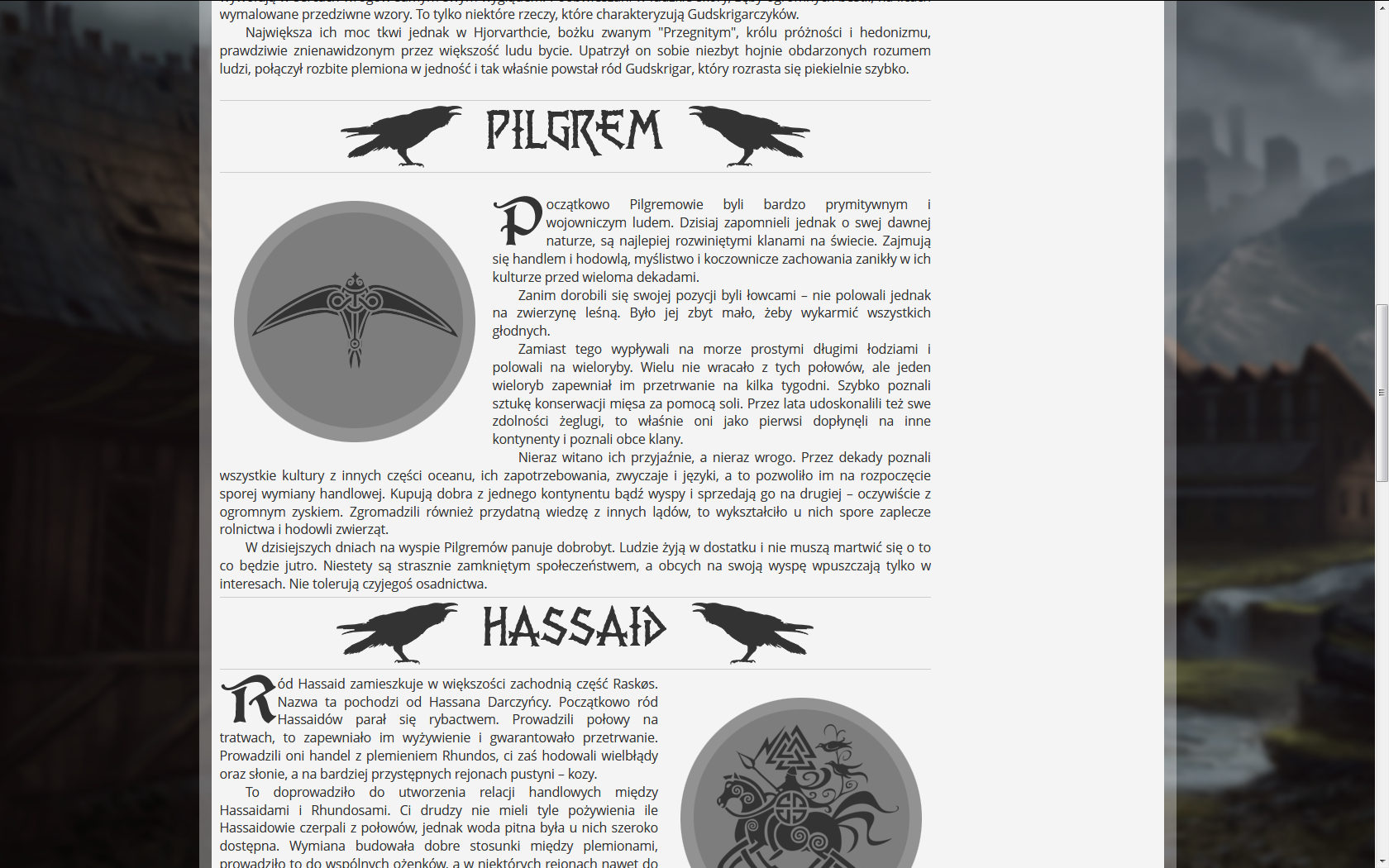 Jorden is positioned somewhere in the middle of this spectrum. The game has statistics, but they are not very precisely defined, allowing the game masters to interpret them quite personally. However, they clearly indicate The differences between the various e need to know who we are, where we come from, and what we are able to do. This solution has its advantages and disadvantages, first of all it is much more accessible for players who do not like mathematical strategizing. Instead, there may be some minor he differences between the effectiveness of our character in a the narrator. If these become too problematic, they can always simply be discussed.

Unfortunately, at first Jorden does not allow us to mix too much in the statistics. We have three categories with three statistics in each. Each stat can be up to level three, but the entire category has a limit of six. This is quite an interesting limitation. To begin with, we get one point in each statistic. If we decide on an adult character we get one additional at will. If we want to play an old man, it comes Also a complimentary point of knowledge. This means that most players start with statistically the same abilities, and their development and the The learning only happens during the game itself.

Of course, this does not mean that the players will be clones. Jorden has a classic system of advantages and disadvantages, in which If we use inborn or acquired in the past defects, such as disabilities or genetic deficiencies, we can acquire advantages that give us something personal. The same goes for skills: our learned life trades and hobbies, which However, when the alternative is wandering through the cold tundra forests. These we buy for a pool of eight points. In the case of the In the system of advantages and disadvantages as well as skills there is no limiting list. So we can show our creativity and come up with something that will define our hero.

When making a character, we have to also get to know the game world. We need to know who we are, where we come from, and what our purpose in life. Jorden has a very well described world, although not deeply developed. This offers us an adventure with a low entry barrier. The whole of Jorden’s basics is contained in seven topics, one of which is a climatic but optional prologue, and another is a description of the mechanics. So we are left to get acquainted with the main e need to know who we are from where and our purpose in life. Depending on your reading speed, you can be ready to play Jorden in less than an hour to two ch. 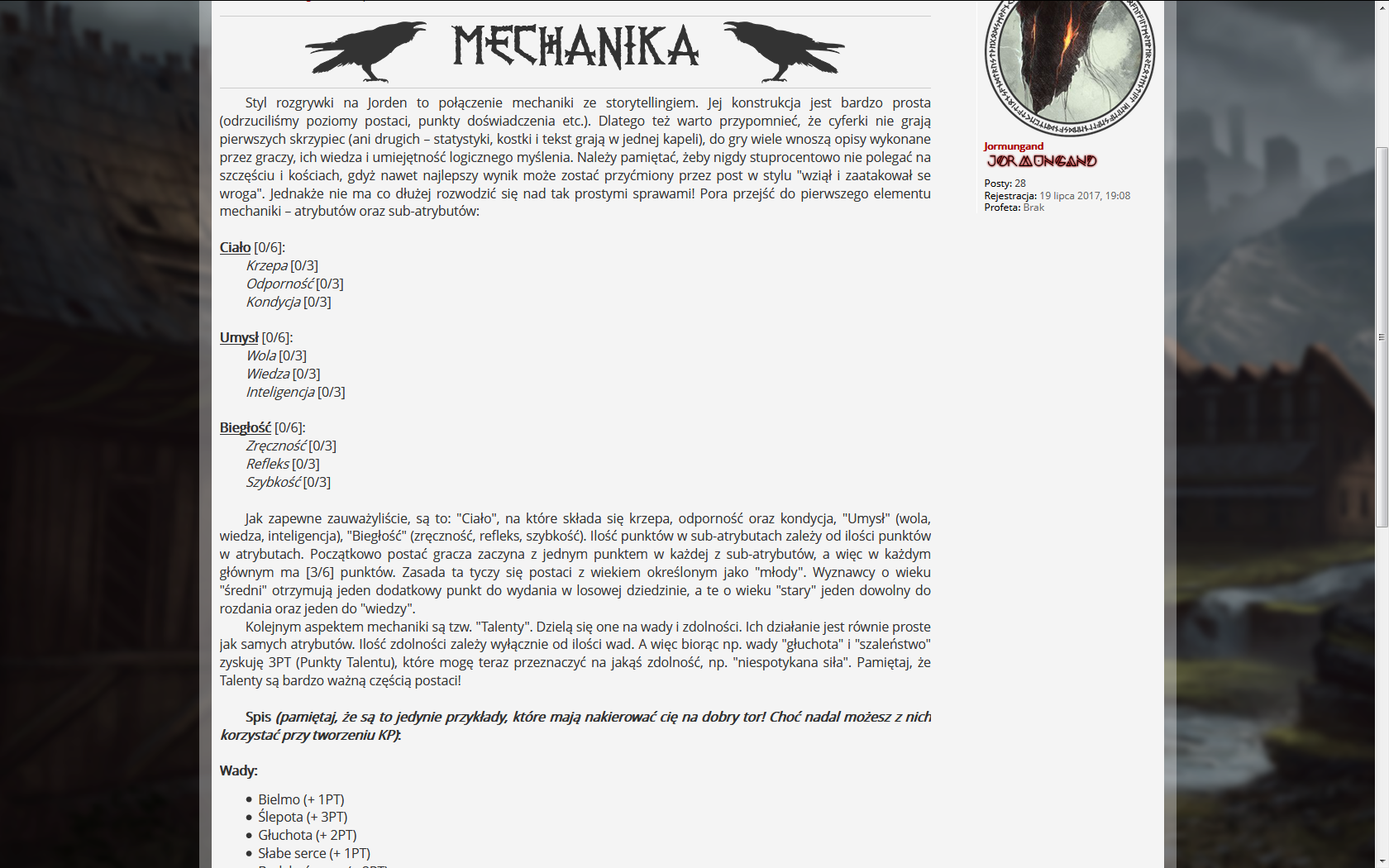 The world itself is inspired by Norse mythology, with traces of fantasy elements. The story is not historical, although it is set in a fairly realistic framework: a typical pop-culture medieval era full of greed in and out ith dung on your shirt is the era of early medieval and early modern times Iron Age, a time when human societies began to rebuild themselves on the heels of rzach after the fall of the bronze age. We won’t see much magic in Jorden, although it is inscribed in the world. The existence of a god This is a fact about which The story is not a historical one, although the characters have a right to be skeptical.

A lot of emphasis in Jorden is placed on the interaction of societies present in the plot. Wyr e have six main rod in with fairly personal features, starting with the typical g rsk poacher In this respect, the game was quite detailed ry hedonist. Over each of these rhodium aint a b g, or at least they profess some. In this way The storyline is driven by social and religious skirmishes.

The gameplay in Jorden takes place in single topics discussing important events in history. So in odr I am not a popular sandbox In this case, we will not see the cannon The game is divided into locations and the potential mess associated with traversing them. Instead, players along with um The players who are not familiar with the genre of forum RPGs, so I can say that making a character is only a matter of time. When this is over, the topic is closed and we can go to the next. This makes it much easier to follow the storyline of each players.

Sam reflects Jorden is very enjoyable. The forum is small, neat and easy to read. Everything is easy to find, and the world descriptions are often accompanied by atmospheric graphics. The writing itself also deserves praise. Thanks to the authentic sounding names it builds a great and unique atmosphere j. 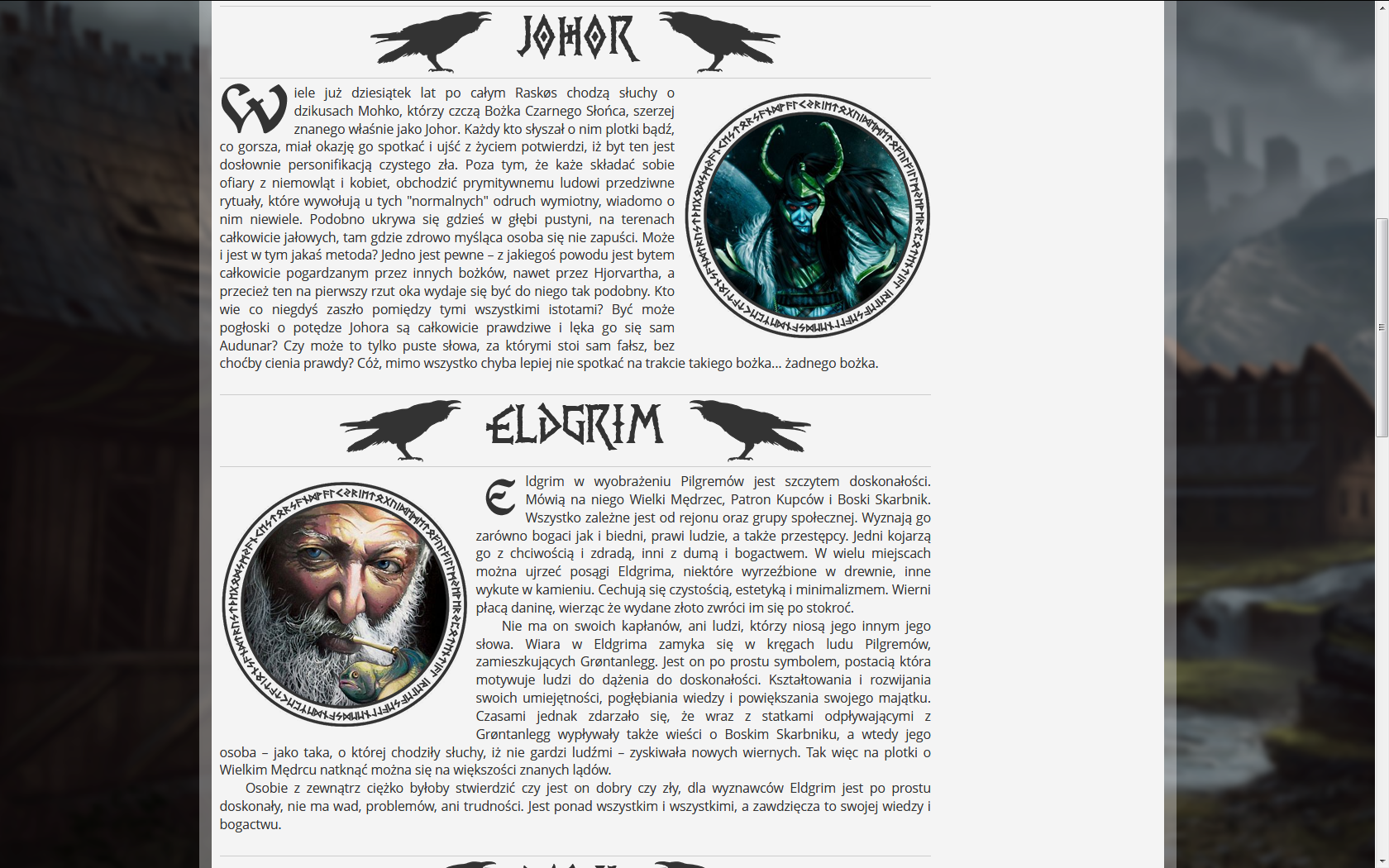 If I had any complaints, the forum doesn’t have any dedicated tutorials in for os b those not familiar with the genre of forum RPG. You will not find a topic here that ry will explain to us the basics of playing a character or building a world. Fortunately, it is easy to ask questions in the forums. A shoutbox is available for those who are logged in You can quickly hook up with someone, and special topics allow you to leave questions in piles and browse what others have asked about. Just wait for the answer.

Jorden is very happy to recommend it to everyone. It is a solidly constructed and readable RPG in a very accessible form. Especially those who Those who know what it’s all about will feel right at home. Making a character is just a kr The first moment, and right after that you can delve into a fairly young world, which a chronicle of which is waiting for new pages.