Starting the adventure with Kapi Hospital I expected something a bit different. A more elaborate and classic. The game turned out to be much simpler than similar titles released by Upjers. Thanks to that it targets a different niche, so I can say that it has sw j its own character. It does a lot of things right, though it seems to be only by accident. I present to you my mixed feelings about „your free hospital simulation through a browser”.

In his own way

In 1998, Bullfrog released a game called Theme Hospital. It was a sort of middle ground between the Dungeon Keeper and Theme Park series. In the game we were in charge of expanding the hospital while taking care of its finances. We have been manually placing our equipment around the e have six different departments and rooms. The game was quite detailed in this respect. I expected something similar from Kapi Hospital, as the Undermaster I reviewed earlier strongly resembled Dungeon Keeper. The game, however, has a slightly different and less complicated perspective on the concept of the director’s work on the hospital. You could even call it a simpler version of Undermaster. 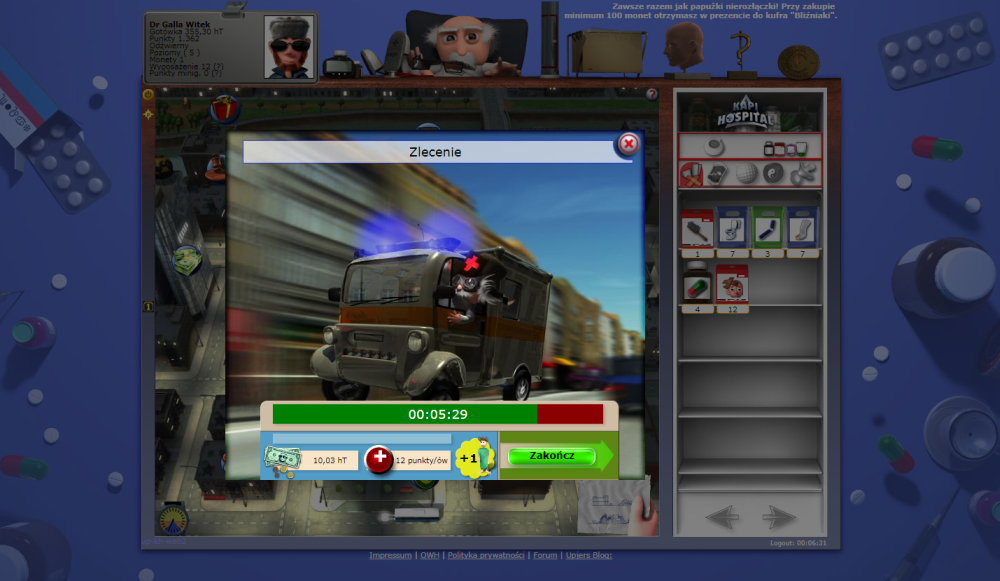 In Kapi Hospital, you play the role of a hospital director, tasked with expanding the facility and treating as many patients as possible. In order to do this, we need to cordon off the old neglected floors of the building and place the required medical laboratories in them. Starting with a doctor’s office and an x-ray machine, we will slowly get new technologies, and our patients will come with newer and newer ailments. Most of the game is about administering them efficiently. Patient You have to manually shuttle patients from one office to another and spike them with medications They speed up the doctor’s workflow. When all the surgeries are occupied we run a patient in to the l he hospital experience. There we can perform some additional treatment in order to increase their satisfaction and (more importantly) their bill. So we deal with the head e are mainly in charge of directing the flow of unhealthy people through our clinic, so that the waiting room is never full (then no one else will come!The game is all about taking care of the patients and the offices are always on the move. Sounds simple and it is.

Once you know the typical ailments of a patient and plan the workflow, the rest goes pretty much on its own. When we get promoted to a higher level the amount of rob t is increasing, so we make a new plan, kt The system quickly becomes routine. This gameplay loop defines the character of Kapi Hospital as a game to catch your breath. Something we keep open in the second tab to press alt-tab once in a while at work. Something to look at while waiting for a new match in a more challenging game. To be honest, this is for me exactly what I expect from a browser game. Kapi Hospital doesn’t try to be anything more than what you expect from a time killer. 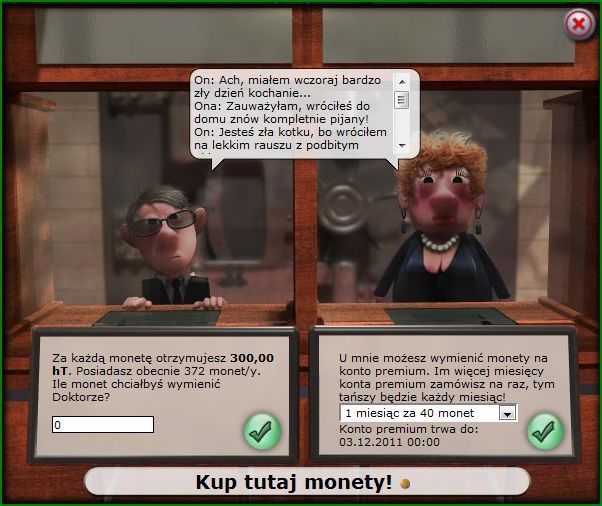 The game has no soundtrack, and I don’t hold that against it. I never spent so much time in the game window that I needed stimulation in my ears. On the contrary, it could be slightly annoying. Instead, there are minor problems on the graphical side. I have very mixed feelings about the graphic style chosen. Typically for the Upjers stable, the game features pre-rendered 3D graphics with stylized illustrations. Some hich the characters look adorable and hilarious. Like the game’s mascot, an old Mr. Chief Medical Officer with a disheveled frieze and mustache. When we send him on assignments to get new patients , some pretty cute illustrations of his struggles are shown. What’s different is when we go to the store into getting medicine or gifts for another player. The sight of the lady at the window triggers the need to use our own plaza ki. Our hospital looks pretty good, especially m hile talking about the rooms themselves. Unfortunately, the patient’s graphics and the services perform poorly in the resolution of the game. Maybe I’m talking too much, but Kapi Hospital is not something I play for the depth of the challenge, so I’m not really into it At least your eyes would be pleasing. It could use a facelift, and this problem is the only thing that makes me unsure whether the game is very good or just ok. 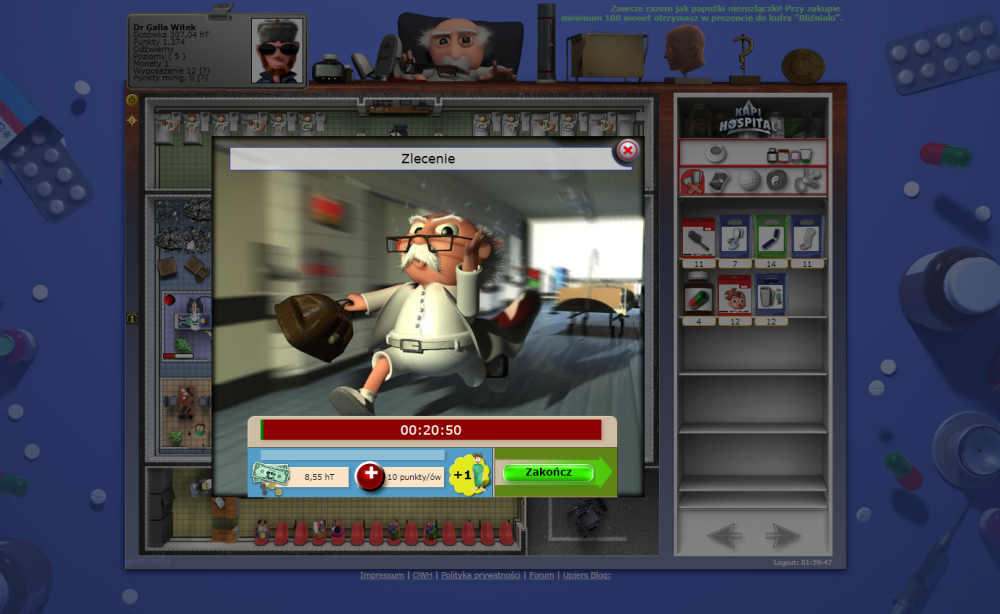 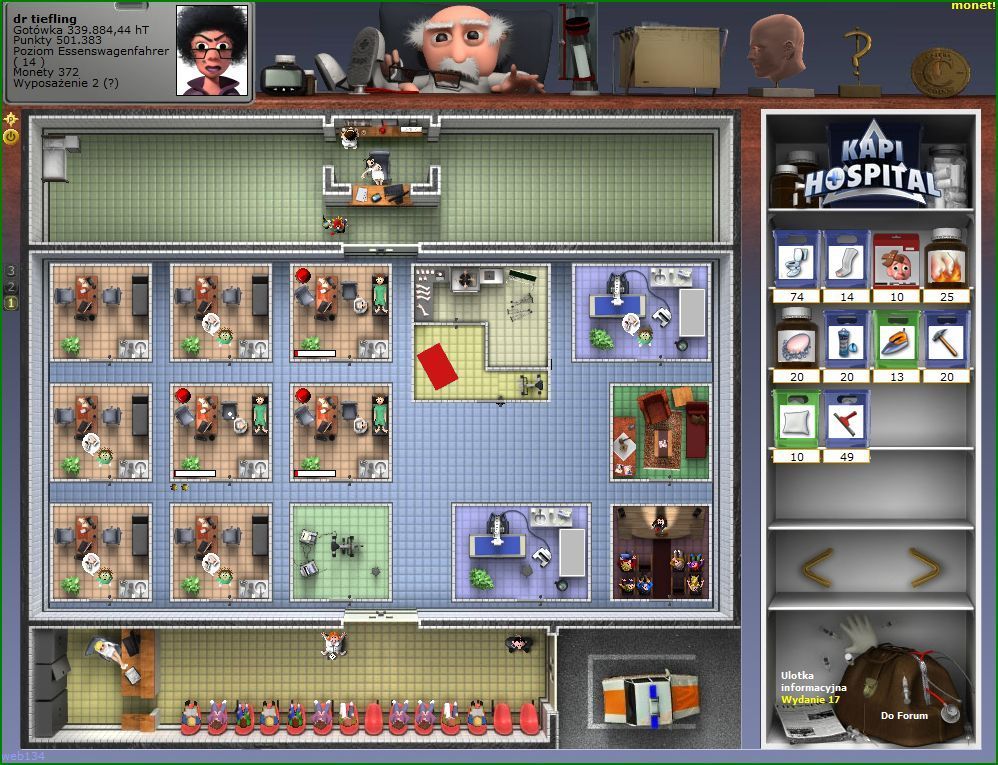 A conversation about the game’s payment system I usually defer to later. Maybe I’m a bad person who The game then steers itself to the point where it wants to get you excited about something, only to tell you that the game is too expensive for your own good. Maybe I want you to look at the game first and then at your wallet. In the case of Kapi Hospital, however, I have a surprise. There’s no need to buy premium in the game. In a typical browser game, playing for free is a kind of trial, which The patient is getting more and more stubborn. Wait times increase and the game loses its sw j black. Here, it came out a little bit on the fringe. The beauty of Kapi Hospital is that it takes care of its patients in and managing them. When you buy premium, most of the gameplay becomes automated. The doctors serve themselves to the patient and the nurses milk them with bandages and pressure tests without our commands. As a result, the game controls itself to a degree that e are almost redundant. Admittedly, there are some cool premium things, like better icons, but they’re not that essential.

The game is so intelligent that even if we choose a patient card, it will automatically show us a list of optional treatments in case we haven’t done some. Without them it does not pay to be sick. But if we have a super need for a slightly more comfortable UI, premium can be bought, but its too useful functionality turned off in options. More interesting are the optional hospital rooms that cost real currency. But there are not many of them and they are not essential. If we decide to go for it, we will pay only once or twice. I think it is worthy of praise and recommendation. Even if it seems random.

“Do you want to work or are we going on strike?”

The game has some additional less significant features. We have the possibility to associate with other players in typical guilds (here called doctor unions). However, they do not have any major features. The game is devoid of direct forms of PvP. Of course there are top lists if one wants to get to the top. We can also send gifts to other players. To my knowledge they don’t give anything. They just prove that someone wanted to spend money on us. The game can be praised for diversity of themes. Apart from operating theaters there is It is also possible to set up a wellness studio or. court for mini-golf. With these options our hospital becomes a bit unique. 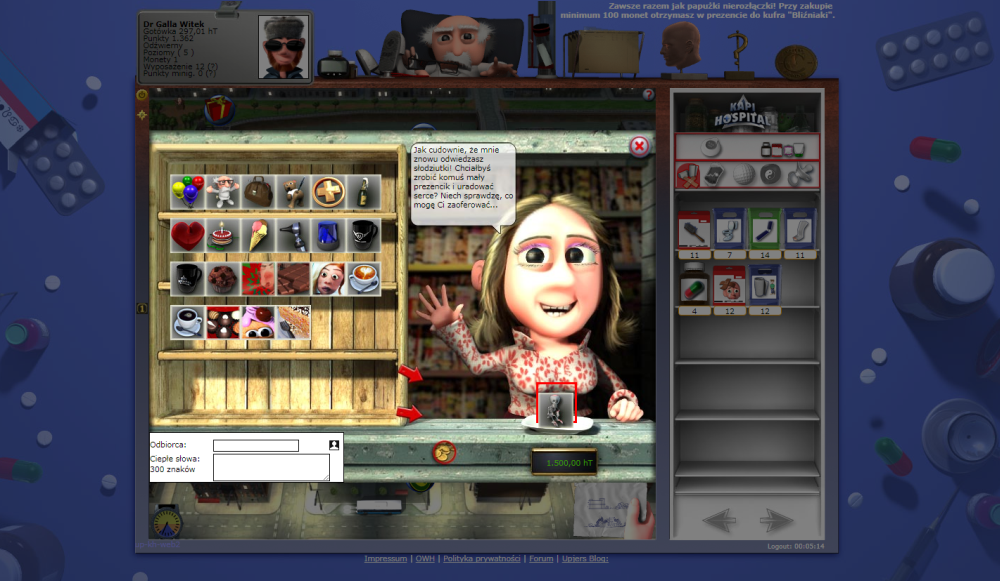 To whom I would recommend Kapi Hospital? For people who need a clicker for their spare time. The one, which Those who like hospital theme and those who ho don’t have time to learn the more complicated titles. The game is very simple, but at the same time very fair. It may just look worse than other options on the market, but you don’t have to look at it that closely either. Kapi Hospital does everything a browser game should. If we decide to use it, we will only have to pay for it once or twice hat we do in front of the computer.